A Trip to Good Word Brewing and Public House

If you’re an average Atlantan, Duluth, GA is not a place you think about visiting unless it’s to pay $10 to drink beer in a floaty on the Chattahoochee. I’ve performed in a couple of plays in downtown Duluth and after weeks of stuffing my face with Pure Taqueria guacamole I noticed some construction across the street with a sign posting that a brewpub was coming soon, Good Word Brewing and Public House! Unfortunately it wasn’t completed before the plays had ended but I never forgot about that place. The downtown Duluth area is one of the most quaint, adorable places to visit. There’s free parking town-wide, you can take your margaritas to go and walk around, there’s a chocolate shop, a clothing boutique, a sip & paint store, all right there on that little stretch of Main Street.

After a planned trip to Shoot the Hooch with Ben last week I was stoked to have a reason to also try Good Word. Immediately upon walking in you get an old pub meets modern restaurant feel. Everything is wooden and the high ceiling with wall length windows allow so much light. However, the 360° bar reminds you of the days of sitting on your favorite stool and starting a conversation with whoever sat next to you.

The staff was incredibly friendly and each let us know that we could talk to whomever to ask questions or even order. We wanted to sample the wares so we got a flight (from L to R): 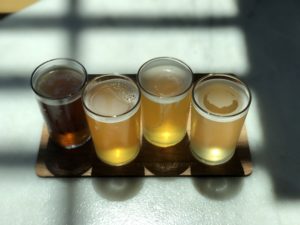 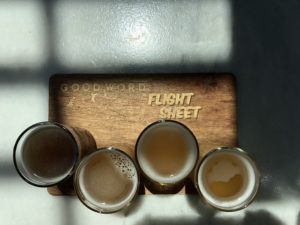 Donna-Maria and Ophelia were the standouts of the four. While they all were good the Rocksteady had a little too much tobacco flavor for my taste and the The Universe Says.., in my opinion, tasted more like a West Coast than a New England IPA. If you looked up “saison” in the beer dictionary, Donna-Maria would be it: spicy, fruity, a hint of coriander, quintessential. Ophelia is such easy drinking. You absolutely taste the apricot and stone fruit flavors the menu description boasts. When our server asked which we liked the best we both said Ophelia. She then told us they have two different types of house made syrup theyuse to give the Ophelia a completely different flavor. I have no recollection what the other syrup was because once she said “huckleberry and basil” I blacked out. 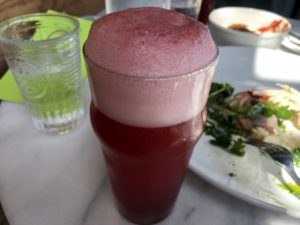 Look at that color! It all tasted so crisp and the depth of the stone fruit and basil kept the syrup from being too sweet. I could’ve drank twelve. But whileyou’re throwing these back, don’t sleep on their food. Their small plates specialty menu was calling our names so we ordered the arancini and the porchetta. 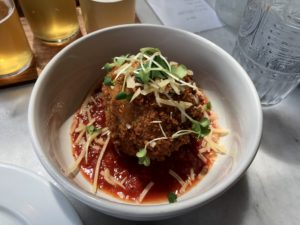 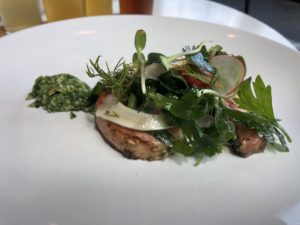 I could try and describe the depth of flavor of these two dishes but I genuinely couldn’t do it justice. The arancini was a perfectly fried ball of breadcrumby cheesy rice with the most delicious “marinara” drizzled all around. The porchetta was a work of art. The fresh greens cut through the fatty bacon. The pesto was roughly combined making it more of a paste than a sauce which kept the integrity of the pine nuts and made the porchetta more earthy.

Good Word is a relatively new locale but they’re brewing beer like a place that’s 3-5 years in. They’ve got their basics but they’re already trying new things and I can’t wait to see what’s to come. Us Atlantans might think of Duluth as such a far trek but it’s absolutely worth it for something like this. Who doesn’t want to walk off all that food with their to-go beer?