If you like beer and/or own a cell phone, you’ve probably heard about the Atlanta Beer Bus, the ATL’s premiere “hop on, hop off” beer bus. Travis Irions, the founder of ABB, got the idea during a visit to Asheville, NC. North Carolina notoriously has a beer culture that’s deeply ingrained in the community and Travis wanted something that could bring more of that here. 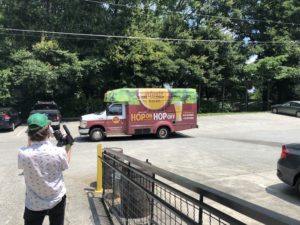 For just $15, you can be dropped off at anywhere from 7-9 different breweries and distilleries all around the downtown area. A bus will make a stop at the brewery you’re visiting roughly every 20-30 mins and you can choose to move on to the next stop or, if you’re enjoying the vibe of the current place, you can hang out as long as you like. I can tell you first hand they are like clockwork. You will never be left wondering if you’ve been left 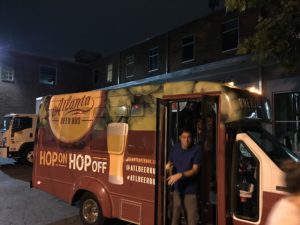 behind or when the next bus is arriving. While you ride, one of Beer Nerds will tell you about your next stop and what you can expect.

That sense of community I mentioned earlier can be felt as soon as you step on the bus. The seats are arranged so everyone’s facing the center, encouraging conversations. You really feel like you’re about to embark on an adventure and your fellow riders are on it with you. 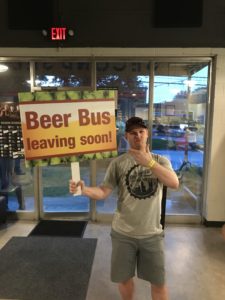 The earlier in the day you start, the more you can experience. You might be thinking, “Only nine? I can conquer that easily!” But Travis says that’s easier said than done. A lot of people over indulge at the first couple places and by stop four or five they’re ready to tap out. No one has had a drink from every stop in the time allotted and I’ll be the first to tell you I’m ready to take on that challenge. And there’s a reward! Their website states that if you take a photo of you at each location and tag them (@atlbeerbus & #atlbeerbus) you’ll win a prize.

I can’t endorse the Atlanta Beer Bus enough. We had the best time: the buses were clean, air conditioned, and punctual, the Beer Nerds were all well educated and friendly, and we truly got to choose our own beer-venture. The price is almost unbelievable and you’re getting the opportunity to try so many different styles of beer in one day. I see a long and fruitful future for these guys and I can’t wait to see what else it brings to the city.
You can read more about it, including FAQ on their website www.atlantabeerbus.com. 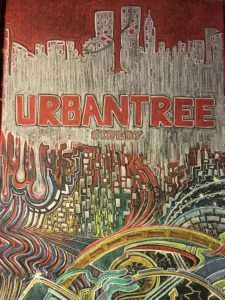 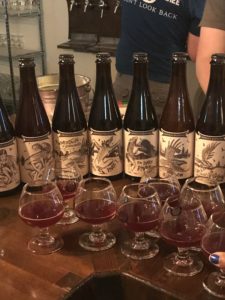 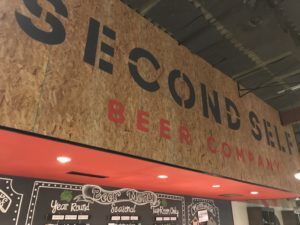 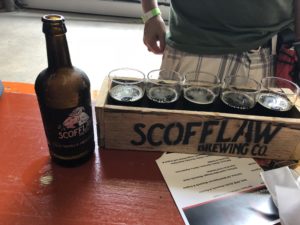 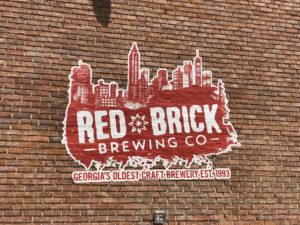