The Basics of Beer with Jen Price

Thank you for being a listener of our Podcast, Bitch Beer! This week we sit down with our Beer expert, Jen Price. Jen is a certified beer server, owner of Atlanta Beer Boutique, and author of The Chick’s Guide to Beer (Seven Simple Rules for the Beer Novice). We discuss her book, her plans for the future, and break down the basics of some of the most popular beer styles.

This blog is a good pairing to what we discuss in the podcast to help our listeners follow along and get more info on the details mentioned.

As we discussed in the podcast, the reason for starting our podcast, blog and community is to be a safe space for everyone, not just women, that want to learn more about beer. We know that the world of Craft beer has been very male dominated, but we are here to show that women have a pretty solid place in its present and future.

One thing we mentioned is the fact that beer ads can feel very isolating towards women or anyone that is not already an expert in beer. Below is the ad we found from brewery in Israel. It is a flowchart showing what happens when people of opposite genders drink. Men drink a beer, meet a lady, go to bed. Presumably for sex or if too many beers are consumed, just regular sleep, cause you know, beer dick. 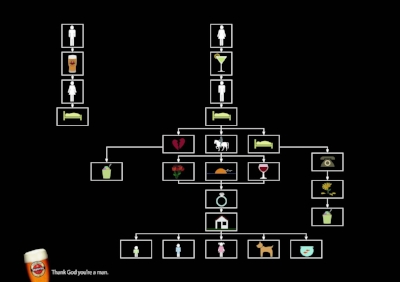 Anyways, the lady drinks a fruity drink in a fancy glass, meets a man, goes to bed for sexy time, and either gets her heart broken and eats ice cream or she becomes a lead character in a british period drama and rides away on a white horse to look at sunsets and flowers, drink wine, get married, have 2 ½ kids a dog and some sort of goldfish. DREAM BIG LADIES!

This is just one of many sexist ads circling the web, but you get the gist. Ladies are accessories to the men that enjoy beer, and men are not manly enough unless they love all beer. We know not everyone views it this way, but you can see how it can feel very daunting for anyone that isn’t a bearded hipster scraping foam off of a deconstructed IPA in a tulip glass at their friend’s improv show.

Our goal is to create a safe, judgment free zone for our followers to try new beers and appreciate everyone else’s opinion. Beer is a culinary experience and everyone will have a different opinion. We don’t care if it’s your neighborhood’s newest brewery or a worldwide brand, if you like it, we want to talk about it.

We’ll start by discussing the basics of beer as described by Jen and then get into our favorite beers.

An article titled The Evolving Role of Women’s Contributions to Brewing Beer on craftbeer.com enlightened us to the fact that beer wasn’t always man’s world. The earliest evidence of a beer recipe was the Hymn to Ninkasi, the Sumerian goddess of beer. Egyptian hieroglyphics depict women fermenting and imbibing. It wasn’t until the Black Plague in the 1400s that the shift from women to men began due to labor shortage. Those surviving began to earn more thus driving up the price of ale. And we all know historically men were the breadwinners. *eye roll*

From Franciscan Sister Doris of the Mallersdorf Abbey in Bavaria to Emma Gilleland, the first female head brewer in England, by the 1980s, women were regaining their traction in the beer world. We’re elated to have the opportunity to pick the brains of some of these women. If you’d like to read a more in depth history read the rest of the article here: https://www.craftbeer.com/craft-beer-muses/evolving-womens-contributions-brewing

One of our favorite parts of Jen’s book, is the detail that she goes into for different types of beers. We won’t go into all of them, that’s what the book is for, but these are our favorites from the list!

Jen defines IPAs, India Pale Ales, as beer made popular by the British that contain a significant amount of hops. They range in color from pale gold to deep copper and are very hop forward in flavor and aroma. IPA’s can be very versatile containing notes of fruit, citrus, pine, floral and earth.

Jen recommends IPAs be served at 38ºF-45ºF in a Tulip or Nonic Pint Glass.

Here are our favorite IPAs:

Witbier is a beer that is typically straw in color and made with wheat rather than barley. They are cloudy in appearance, smell and taste of warm spices (think coriander and nutmeg), and are often brewed with orange peel.

Jen recommends they be served at between 40ºF – 45ºF in a Weizen or Tulip glass.

Here are our favorite Witbiers:

Sour Ales (also known as Wild Ales due to the history of wild fermenting these brews) are tart beers often featuring an acidic or vinegar like quality with no hop bitterness. Sours often have a straw to medium amber color. Specific styles of sours include Lambic, Berliner Weisse, and Gueuze.

Jen recommends they be served at between 40ºF – 50ºF in a Chalice, Tulip, Flute, or stemmed glass.

Here are our favorite Sours:

Stout is a beer style that evolved from Porters with more roasted or burnt flavors. They typically taste of toast, chocolate, and coffee. Despite being very dark in color, stouts are traditionally low in ABV and are not particularly heavy.

Jen recommends they be served at between 50º – 55ºF in a Nonic Pint or Snifter glass.

Here are our favorite Stouts:

Belgians are broken down into three general styles: Dubbels, Tripels, and Quads. Jen defines a Dubbel as fruity and carbonated, a Tripel as banana scented and spicy, and a Quad as caramely and boozy.

Here are our favorite Belgians:

Caroline: Goats in the Garden- Abbey of the Holy Goats

We hope this was a helpful guide to different styles of beer, for even more information and details about beer, make sure to get your copy of The Chick’s Guide to Beer from Jen Price below!

The Chick’s Guide to Beer 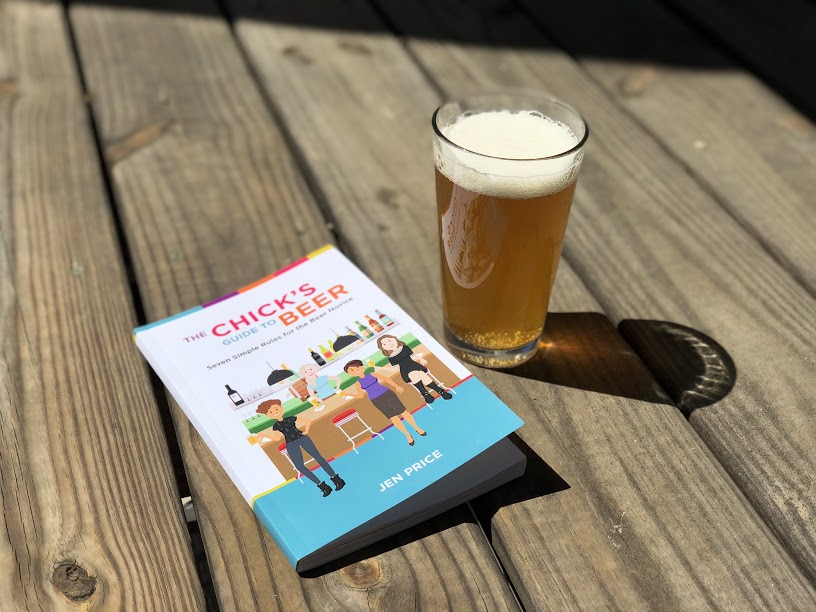